Well peeps, I finally had some extra time to finish some more tweeks on the ’59 Bassman clone.

First up I replaced the “orange drop” signal capacitors with SoZo units. These are closely modeled after the Yellow Astron and Blue Molded series of vintage capacitors. Listening before and after the SoZo units was quite revealing. The sound, after putting in the SoZo units became higher in fidelity. The high-end was nicer, more articulate. The bottom-end was tighter and a bit more beefier. Amazing! 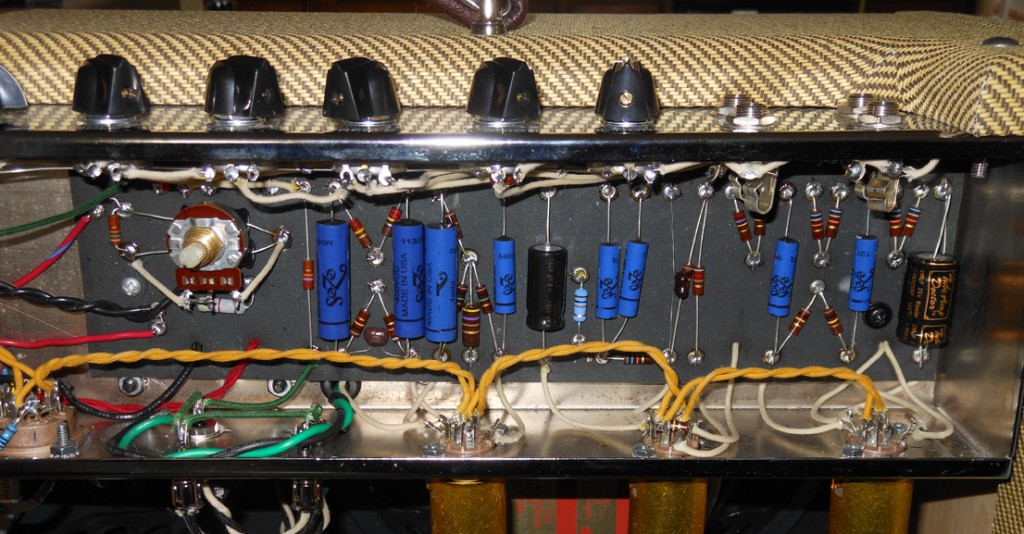 Next up, I modified the bias circuit making it adjustable. I removed the 56k resistor and replaced it with a 50k linear potentiometer wired as a rheostat. I also replaced the ground wire from pin 8 to chassis with a 1 ohm resistor to ground. This will assist you in taking readings with a voltmeter to bias the power tubes. Once you have an adjustable bias control you can really dial in your sound. I started out low in bias voltage and ended up higher than what Fender traditionally has it set at.

At about 18 static dissipation watts per tube, the sound really opened up. The player can no be very expressive in their playing. Using a lite touch sounds nice and clean while a more aggressive touch makes the amp break up just wonderfully. Find out what your output tubes can handle in wattage. The 5881’s max out at 24.