Part 4, Final Assembly and testing of the chassis:

NOTE: The ground switch is not connected. Due to the current power grounding schemes in the US, the Ground switch does not do anything to help in getting rid of hum. You will notice that I used one of the ground switch terminals as a connection point only. The proper way to hook up the power input to the Power Transformer is by connecting the white wire to one of the black PT input wires and the black wire (coming in) going thru the fuse and the Power switch before connecting to the other black PT wire.

Tip: For minimum hum, keep all wires as short as possible. 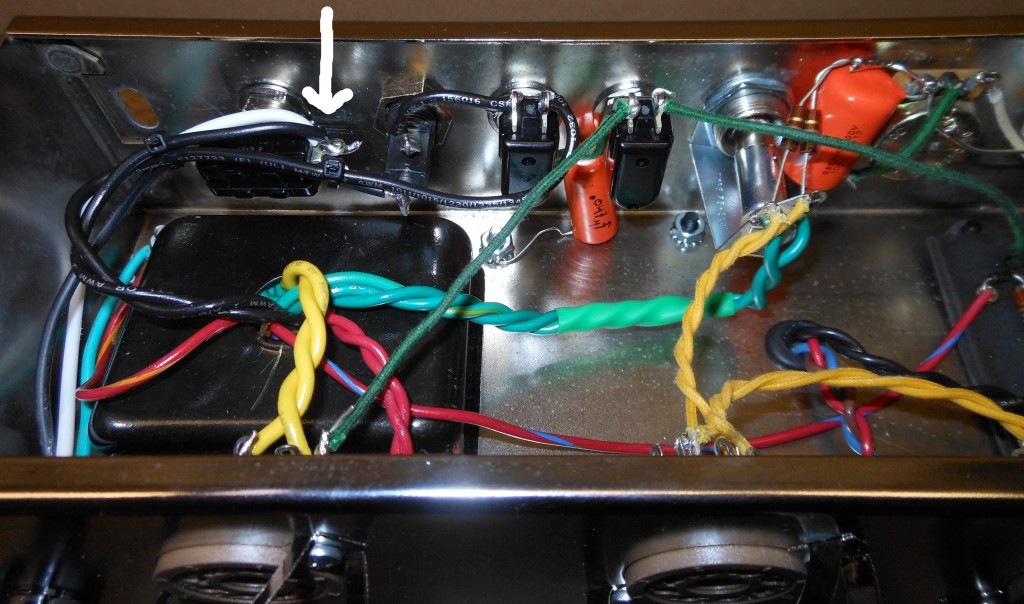 Now, a discussion of tubes is in order. Currently there are less than 6 manufactures of audio tubes in the world. Czechoslovakia, China and the former Soviet Union. I prefer the Russian tubes. MojoTone uses JJ tubes in their kits. While these are pretty good, I have my own ideas on tubes. I picked the Sovtek 5AR4 rectifier based on past experience with Sovtek and reviews of great extension and tightness on the bottom end. NOS (new old stock) tubes can provide better handling of the rectification but I feel that the cost is too much for what you get. For power tubes I decided on 5881’s vs 6L6’s. In general 6L6’s have a bit more gain but I’m going for tone. So, 5881’s by the newly reissued TungSol version built by the Russians. The preamp tubes get more interesting as there are a lot more choices and which ones you put in what stage. As you peruse the internet you will find hundreds of opinions on all sorts of combinations. For V1 I am staying with the 12AY for better tone. I have picked the EH (Electro Harmonix) from “Doug’s Tubes”. No reason for balancing or matching the triode’s as ½ the tube is for the normal channel and the other ½ is for the bright channel. Who cares, its 2 different inputs. Viva la difference. V2 goes before the tone circuit, the first ½ increases the voltage and the second ½ matches the impedance for the tone circuit. Here I chose a NOS 12AX by GE, this is where you want to use a great sounding tube. (Does not need to have matched gain or balanced triode’s). Next up is V3, the phase inverter. This tube creates the plus and minus waveforms for each of the 5881’s. Some also call this the “driver”. This is where you want to use a high quality tube and get it with balanced triode’s and matched gain. I used a reissued 12AX TungSol from Doug’s Tubes.

So, fired it up sans tubes, took some voltage measurements and all was good. Put the tubes in and ran some sound thru it, no issues. Took the amp over to my Guitar buddy Kris and we ran it thru a 2-12 cabinet with v30 Celestion’s. Playing his custom late 2000 Strat, he was grinning ear to ear. That sounds X@X@Xing awesome he says. A few adjustments of the gain and tone controls and he’s loving it. 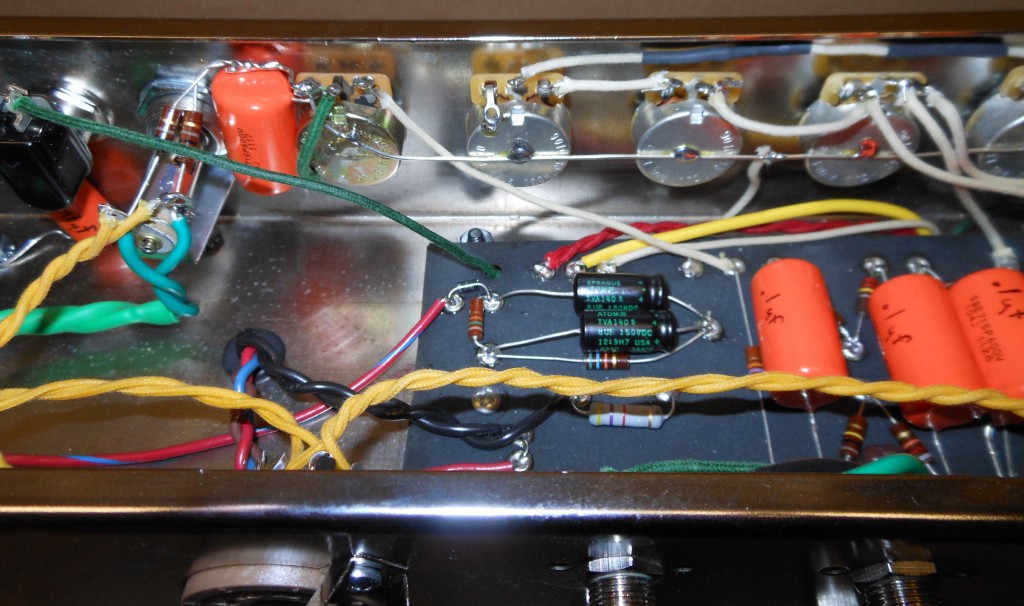 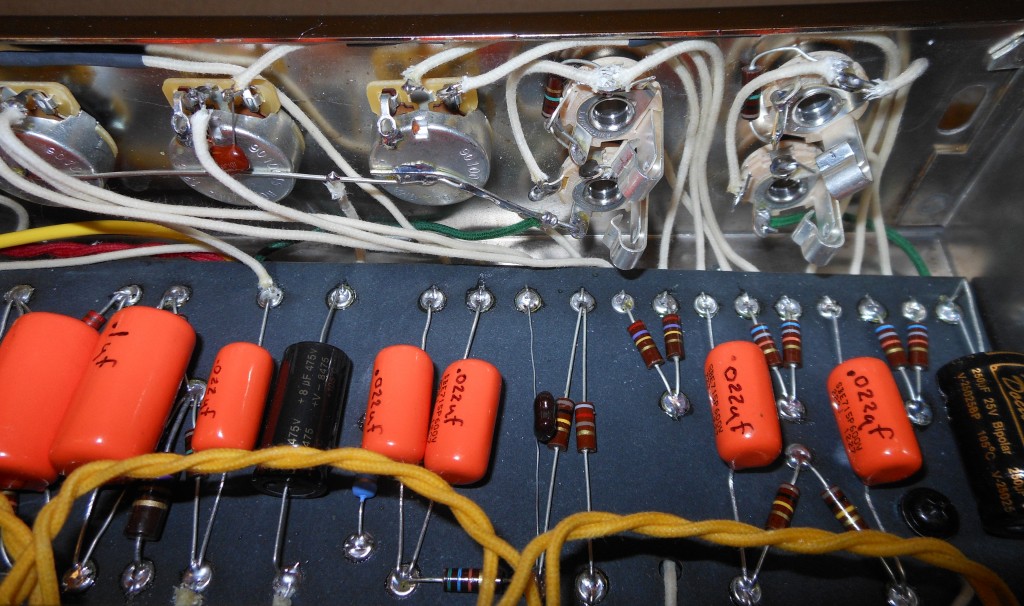 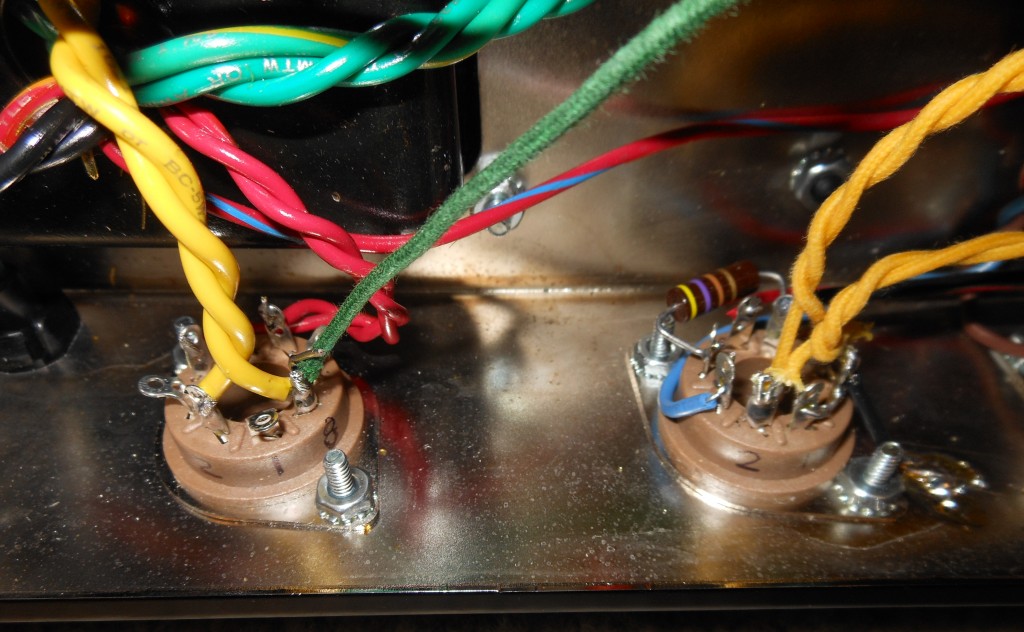 Stay tuned for more to come on this exciting project!